From the log of his second voyage to the New World, in 1493, we know that Christopher Columbus had Reiter’s syndrome, but it wasn’t until 1916, when a Prussian army doctor named Hans Reiter described the symptoms of the disease in a young World War I cavalry officer that RS was clearly identified. And it wasn’t until 1985, when Pope John Paul II visited Midland, Ontario, that a clear link was made between certain types of bacterial or viral infections and onset of the disease. On that day, some 1600 Ontario Provincial Police (OPP) officers nibbled on box lunches prepared for them; nearly 500 of them came down with diarrhea and associated gastrointestinal problems due to salmonella poisoning.

Unlucky for them—but a nice break for researchers, who had a contained study group. When nineteen policemen developed symptoms of arthritis within three weeks of the Pope’s visit. Dr. Robert Inman, a rheumatologist and immunologist at Toronto Western Hospital, and his colleagues were able to prove a definite link between RS and the HLA-B27 genetic marker.

RS is a form of reactive arthritis, which is caused by an infectious agent—a bacterium, virus, or fungus—that passes via the bloodstream into a joint (or enters directly through surgery or injection).

Other types of reactive arthritis include gonococcal arthritis (sexually transmitted), Lyme disease (via the bite of a tick that feeds on infected deer), viral arthritis (from hepatitis, rubella, etc.), and rheumatic fever (following a streptococcal infection). RS is the most common form, affecting an estimated 3.5 people per 100,000, usually men (perhaps twenty times more often than women, and rarely in children).

Arthritic symptoms typically appear within one to three weeks of an inciting urethritis (inflammation of the urethra) or diarrhea; there may be low-grade fever (or high fever and weight loss in some people), followed by joint stiffness, muscle pain, and low-back discomfort, particularly in the sacroiliac joint. As in Psoriatic Arthritis, the low-back pain may radiate into the buttocks and thighs, and it’s actually worsened by bed rest and inactivity. Knees, ankles, feet, and wrists are most commonly affected, usually in an asymmetric pattern; they may be slightly swollen and stiff, tender to the touch, and difficult to move through a full range of motion without pain.

A distinctive feature of RS is inflammation where ligaments and tendons attach to bone (enthesopathy), as opposed to a synovitis (inflammation in a joint), which helps to distinguish it from RA. Fingers and toes may take on the appearance of “sausage digits,” which can lead to confusion with psoriatic arthritis; the hind part of the foot may become swollen and tender, and the Achilles tendon, and plantar fascia (a tough band of tissue on the sole of the foot) may also become inflamed (plantar fasciitis).

Some 40 per cent of all RS patients also suffer conjunctivitis (“pinkeye”) early in the disease, though it’s usually mild and self-limiting. A more serious concern is uveitis, which is often acute and generally begins in only one eye. If you’re experiencing pain or inflammation of the eye, you should be seen as soon as possible by an ophthalmologist. Most problems can be easily dealt with using appropriate medication, but if it’s not treated, eye damage can result.

NSAIDs are the medication of choice for most of the inflammatory symptoms of RS, with corticosteroid injections sometimes prescribed for enthesopathy problems, such as plantar fasciitis. More intractable cases may be treated with methotrexate or azathioprine. Bed rest is sometimes helpful where there’s little lower-back pain, and range-of- motion and isometric strengthening exercises are highly recommended.

Some people only suffer a single, self-limiting experience of arthritis with RS, but as many as half of those with the condition undergo an up-and-down course over an extended period, and approximately one in five people suffer a chronic, even disabling form of the disease.

The best advice for avoiding RS is simply to watch what you eat: If that sandwich you’re eyeing has been sitting out in the sun, pass on it. You can always eat later. 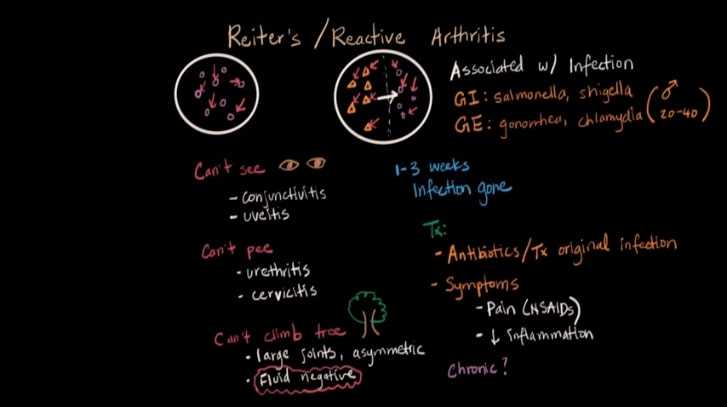 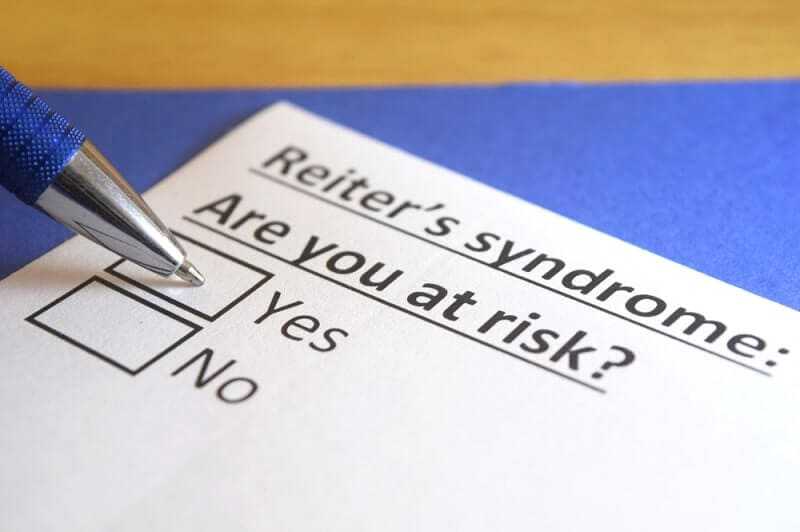