Athletes, particularly runners, are well aware of the problem of plantar fasciitis, and I shall have much more to say about them. But, as is the case with the general public, they do not really understand the disorder, and they are saddled with numerous myths about how it is caused and how it ought to be treated. Well, even medical professionals are in difficulty when it comes to plantar fasciitis, especially when they have yet to agree as to whether the plantar fascia is a tendon or a ligament. 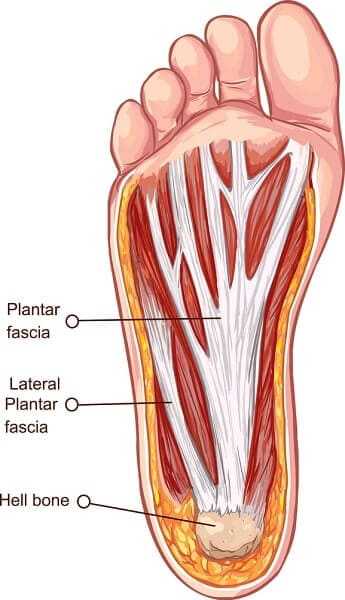 As you can see in image, the plantar fascia is attached to the heel bone and to the five metatarsal bones that are situated in the forefoot. The fascia has two tasks to perform: the first is to support the longitudinal arch of the foot, and the second is to help prevent over- pronation.

If the subtalar joint is abnormally pronatmg, the plantar fascia, which is already tightly strung in its normal condition, becomes stretched even further, and twisted, as it tries to prevent the abnormal pronation from occurring. This extra stress on the fascia can eventually cause it to pull the lining of the bone away from the bone — a condition known as periostitis (inflammation of the lining of the bone). When this happens, the area becomes quite uncomfortable and the sufferer is eventually forced to seek medical treatment. Depending on the expertise and discipline of the care giver, the patient is told that he or she is suffering from plantar fasciitis or — horrors of horrors — heel spurs . (More about heel spurs) If you can imagine pulling a tuft of hair from your head, you will have a fair analogy to the discomfort of plantar fasciitis. 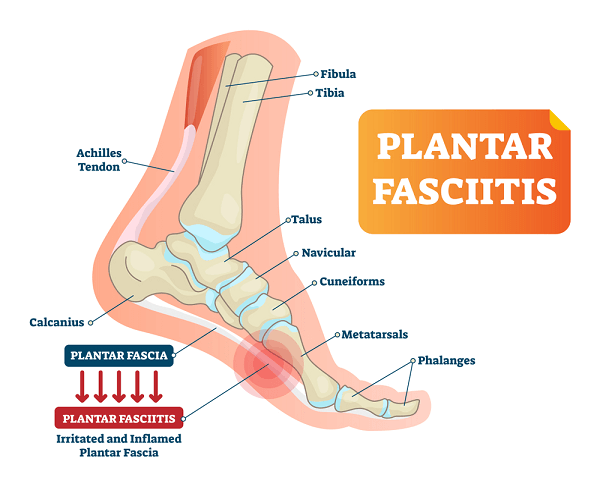 Plantar fasciitis can plague its victims for years. I had one patient who suffered from the disorder for twelve years, during which time he had a total of four operations to try to correct the problem. The surgery involved is quite controversial and rarely warranted. This particular patient is now feeling much better thanks to advances in computer gait analysis and better orthotics, but he still has occasional recurrences of the disorder.

Plantar fasciitis is often confused with heel spurs. I have lost count of the number of people who have told me that they suffer from heel spurs because the were told so by another medical practitioner or a friend with a similar problem. People do not suffer from heel spurs, because heel spurs do not cause pain. Spurs develop in response to a painful situation, in an attempt to relieve the discomfort. Heel spurs are not really spur-like at all. They are ridged when seen head on, although they may look like spurs on a two-dimensional X-ray. Regardless of their actual appearance, their development can be explained by a simple theory of kinesiology — bone conforms to the stress under which it has been placed.

When a situation occurs that causes the plantar fascia to pull hard at the area where it is attached to the heel bone, that bone eventually begins to grow in the direction of the pull. This is natures way of preventing the plantar fascia from pulling the lining away from the bone. All things being equal, the inflammation around the stressed area will then heal. Unfortunately, however, this is not always the case. 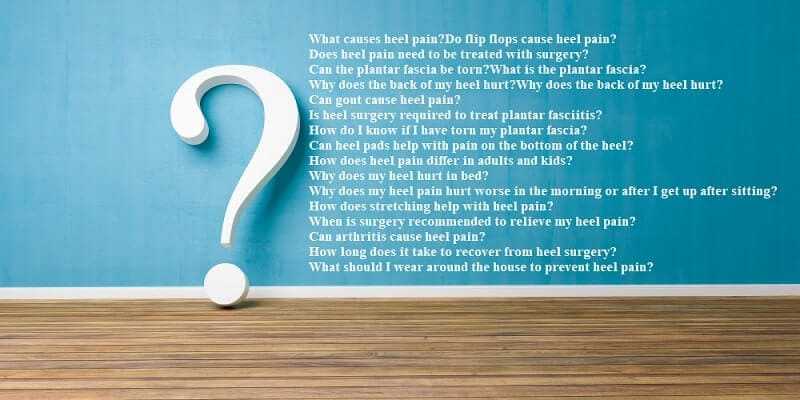 But, in any event, it is the periostitis that causes the pain, not the bone, because bones have no nerve endings. Studies have shown that if both feet have heel spurs, the pain is much less noticeable where the ridge is longer. In fact, should the heel ridge grow sufficiently, the pain from the plantar fasciitis would disappear totally.

So, in summation, a heel spur grows in response to the long-term existence of plantar fasciitis, since such a chronic inflammatory process at the attachment of the plantar fascia to the heel bone creates osteoblastic activity (new bone growth). People do not suffer from heel spurs; the heel-bone shape changes to counter the causes and effects of plantar fasciitis.

OH. HOW I HATE TO GET UP IN THE MORNING!

The classic characteristic of plantar fasciitis is pain in the area of the inflammation when pressure is first put on the foot in the morning. Once a person with the disorder has been walking around for a few minutes, the pain subsides, and the normal daily routine can be conducted without too much discomfort in the heel area. However, any lengthy time spent sitting or lying during the day will bring on the pain, as soon as weight is again put on the foot. I he sufferer will most likelv believe that the pain is caused by a bone bruise, but the bone involved — the heel bone — is not easy to injure, as we have already learned. The culprit is the plantar fascia, which pulls the periosteum away from the bone.

Why Do My Feet Hurt In The Morning? 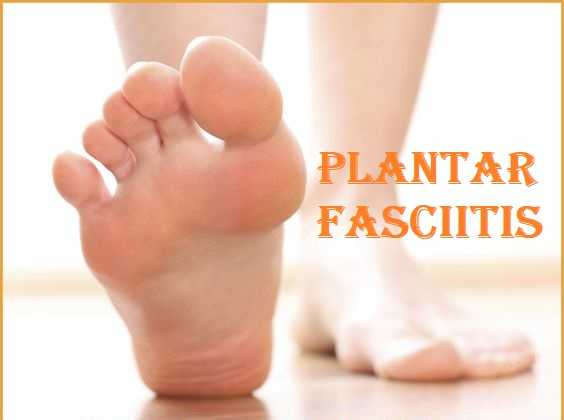 I like to use the analogy of pulling apart two pieces of Velcro. One piece — the periosteum — has been reattached overnight to the fibres of the second piece — the plantar fascia — in a normal healing process. And then, in the morning, with one step on the ground — rip! The two pieces are pulled apart again. That is one suspected reason that the area is so sore after a person has been off his or her feet for long periods of time and then puts weight on the affected foot. The periosteum tries to reattach itself to the bone whenever the foot is not on the ground. This healing process is rudely interrupted when the person stands on the foot, and puts weight on the offending area. Renewed tearing away of the periosteum takes place, and the pain becomes severe. After that initial agonizing period, the pain subsides to tolerable levels after a few minutes of walking. Of course, any subsequent pam is nothing compared with that felt with the first few steps.

A second theory, which also has much merit, is that the plantar fascia contracts during the night, when the feet are being totally rested, and is therefore very tight and sore when first subjected to weightbearing in the morning. As it naturally stretches out, the plantar fascia becomes less stressed, reducing the pulling on the periosteum, and the pain subsides as the person continues to walk. This would seem to be a plausible explanation, considering that the pain does subside after a few minutes of walking. 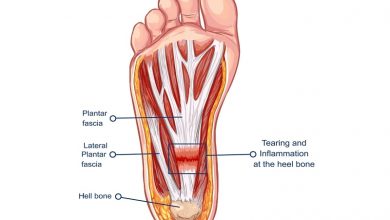 How to Manage Plantar Fasciitis 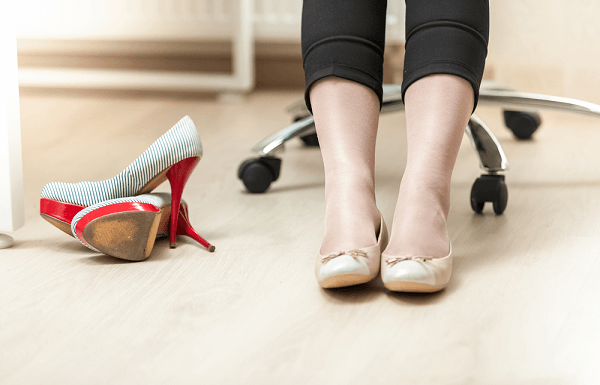 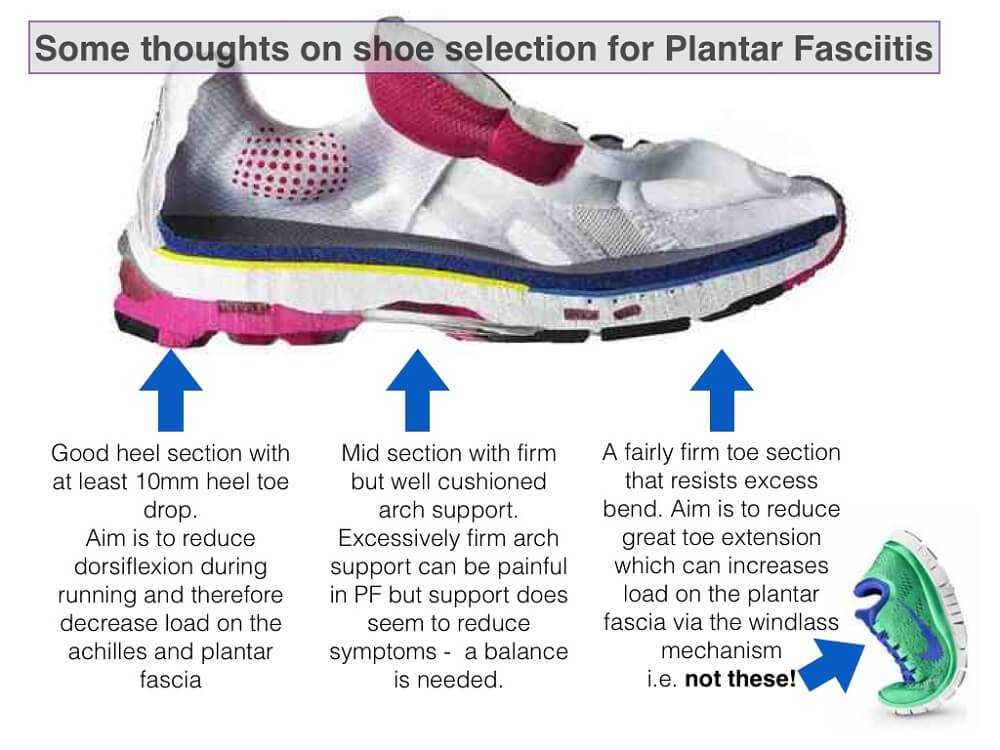